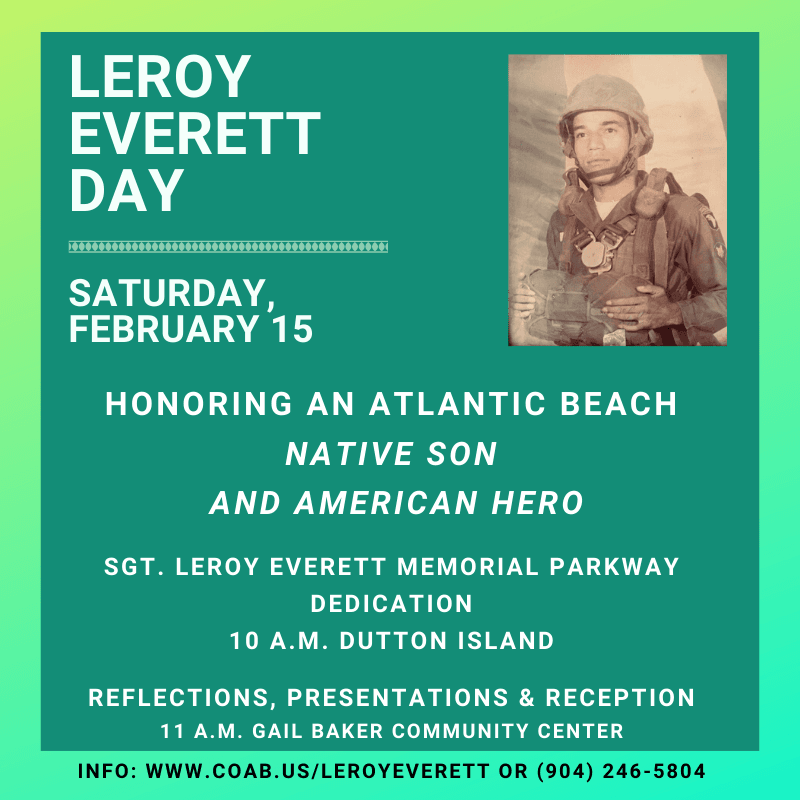 The Atlantic Beach community celebrated a fallen native son with a special event on Feb. 15, 2020, which was proclaimed "Leroy Everett Day".

During a dedication ceremony, the City unveiled a road sign designating the road in Dutton Island as SFC Leroy Everett Memorial Parkway.

Afterward, the City hosted reflections, presentations, and a reception at nearby Gail Baker Community Center.

On Dec 19, 1967, during the Vietnam War, then-25-year-old Sgt. First Class Everett, while serving as a member of 101st Airborne Division, lost his life along with nine other crewmen when their helicopter crashed in South Vietnam. Leroy had already finished a tour in Vietnam came back to Atlantic Beach, but he decided to re-enlist for his country. Ten days into his second tour, Everett’s helicopter went down.

The Commission-approved resolution reads, “The City Commission hereby directs staff to erect and proudly display suitable markers at the honorarily designated roadway to honor Atlantic Beach resident Sergeant First Class Leroy Everett, who gave his life for our country during the Vietnam War.”

Everett was born and raised on Mealy Lane in Atlantic Beach. He played as a child on Dutton Island Preserve, known locally at the time as “Girvin Island.” Later, to practice for upcoming Douglas Anderson High School swim meets, he would often jump from the Preserve’s bridge into the water.

On Dec. 19, 1967, a UH-1D from the 162nd Assault Helicopter Company sustained engine failure at an altitude of 200 feet during takeoff from Phouc Vinh Airfield loaded with troops for a practice combat assault. The tail boom struck trees and separated from the aircraft, and the main cabin hit the ground and turned over, burning on impact. Engine loss was due to fatigue failure of a blade in the turbine wheel. All 10 people aboard the helicopter suffered fatal injuries, including Everett.

Everett is forever honored on Panel 32E, Line 21 of the Vietnam Memorial Wall.

“Leroy had already finished a tour in Vietnam and came back to Atlantic Beach, but he decided to re-enlist for his country. Ten days into his second tour, Leroy’s helicopter went down,” said Atlantic Beach resident Lenny Jevic, who spearheaded the effort to honor Everett.

Other Atlantic Beach natives who lost their lives serving their country had previously been honored with street and park namings; Everett is the first African-American to receive such honor in the city.