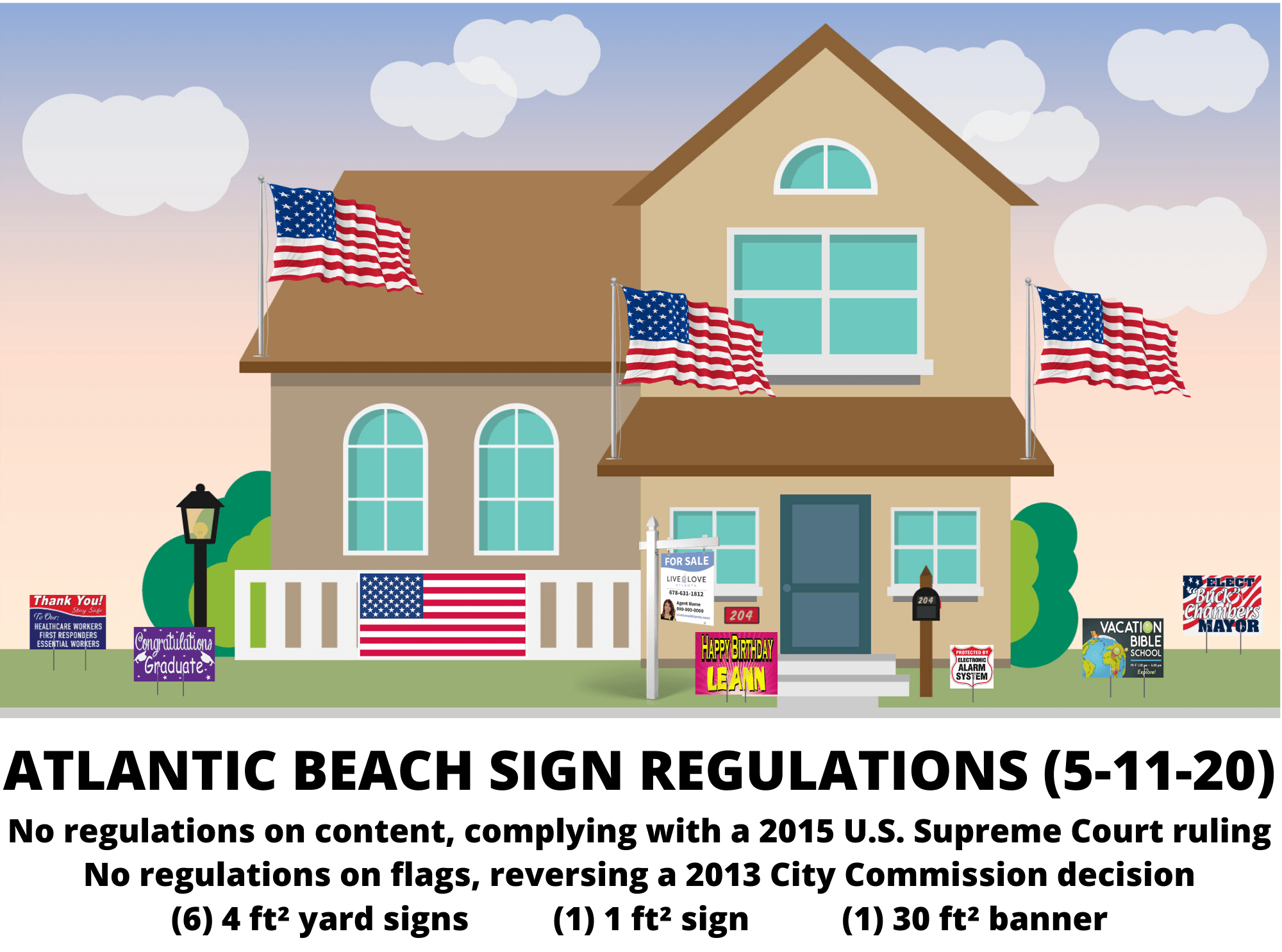 The City Commission updated its sign regulations on May 11, 2020, upon unanimous adoption of Ordinance 60-20-11.

What you need to know in 60 seconds about the new sign code ...

Residential Regulations – no permit required for the following:

Here is the presentation made by the Planning and Community Development Department during the May 11, 2020 meeting.

Here is the ordinance.

If you have questions or need additional information, contact the Planning and Community Development Department at (904) 247-5841 or email info@coab.us.

May 6, 2020 update (including a memorandum from the City Attorney addressing whether U.S. flags can be exempt from content-neutral flag regulations )

The City Commission is closing the loop on that decision by considering a constitutionally compliant sign regulation update. Among the provisions being considered are expansions to the number and size of flags allowed per parcel or removing the 2013 inclusion of flags from the sign code, altogether.

Here is a May 6, 2020, memorandum from the City Attorney addressing whether U.S. flags can be exempt from content-neutral flag regulations: “Sign Code – United States Flag Exception”: https://www.coab.us/DocumentCenter/View/12063/Memo-re-flag-exception-May-2020

Here is information on the May 11 Commission workshop: http://coab.us/Calendar.aspx?EID=6100

Here is the May 11 regular Commission meeting agenda packet, which includes the latest version of the sign regulations update: https://coab.civicweb.net/filepro/documents/15609?preview=18251&splitscreen=true

The City Commission members can be simultaneously emailed at electedofficials@coab.us. 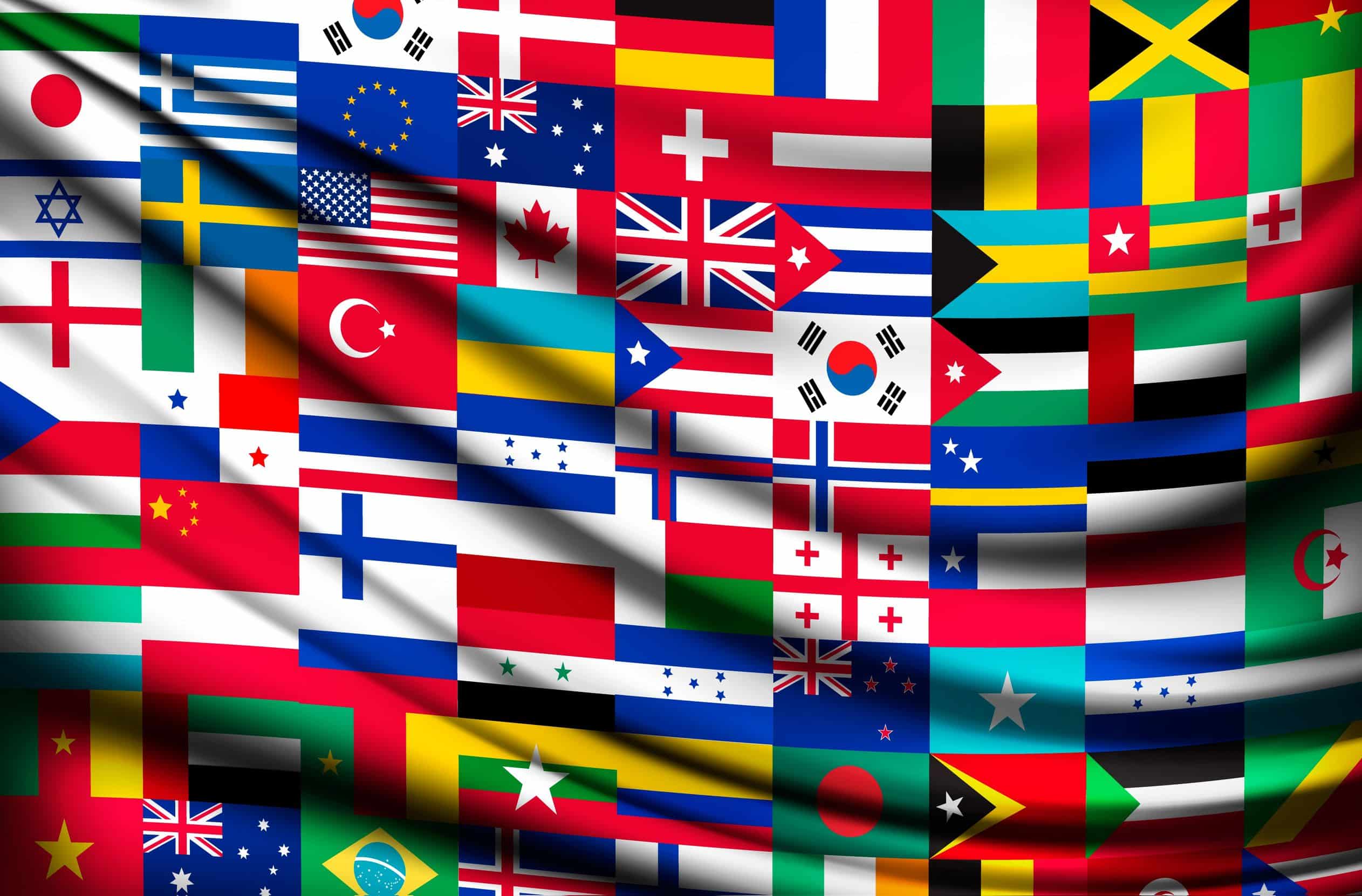 In 2013, the Atlantic Beach City Commission specifically added flags to its sign regulations by a unanimous vote, without public opposition during either reading of the ordinance. The 2013 ordinance amendment defined flags and restricted the number of flags to two (2) per parcel and limiting each to 24 sq. ft. per flag with the following language:

“Not more than two (2) flags per development parcel, but if there are two (2) flags, then one (1) must be the flag of the United States of America. A development parcel with more than one (1) principal structure may have two (2) flags for each principal structure with more than 5,000 square feet of fully enclosed floor area. Each flag shall not exceed twenty-four (24) square feet in area; however, this size limitation shall not apply to the United States of America flags at public buildings and parks.”

On Aug. 8, 2016, the City Commission recognized the City’s content-based sign code restrictions to be unconstitutional, agreeing with a 2015 U.S. Supreme Court ruling. In its unanimous vote, the Commission agreed to suspend enforcement of all regulations governing temporary noncommercial (residential) signs and guided staff to develop constitutionally compliant, content-neutral revisions to the sign code.

Here is the Commission’s executed resolution stating its intent to comply with Supreme Court: http://coab.us/DocumentCenter/View/11824/Resolution-No-16-04

Here is the video recording of the 2016 meeting at which the topic was discussed in detail, the resolution unanimously approved, and guidance was provided to staff to revise the code: http://atlanticbeachfl.swagit.com/play/07252016-826.

In the case Reed et al. v. Town of Gilbert, Arizona, et al., (No. 13-502, June 18, 2015), the U.S. Supreme Court unanimously ruled that regulations that categorize signs based on the type of information they convey (e.g. temporary, political and ideological) and then apply different standards to each category are content-based regulations of speech and are not allowed under the First Amendment to the United States Constitution.

In this case, Gilbert, Ariz., had sign regulations that prohibit the display of outdoor signs without a permit, but exempts 23 categories of signs, including the three relevant here:

Upon appeal, the United States Supreme Court held the sign provisions are content-based regulations of speech – the categories of temporary, political and ideological signs are based on their messages and different restrictions apply to each category. As such, the restrictions that depend entirely on the sign’s communicative content and are unconstitutional.

Want to know more about how communities are dealing with topic? Here’s a helpful essay on Florida sign regulations, legal issues and the First Amendment by Patrick W. Krechowski, Esq.